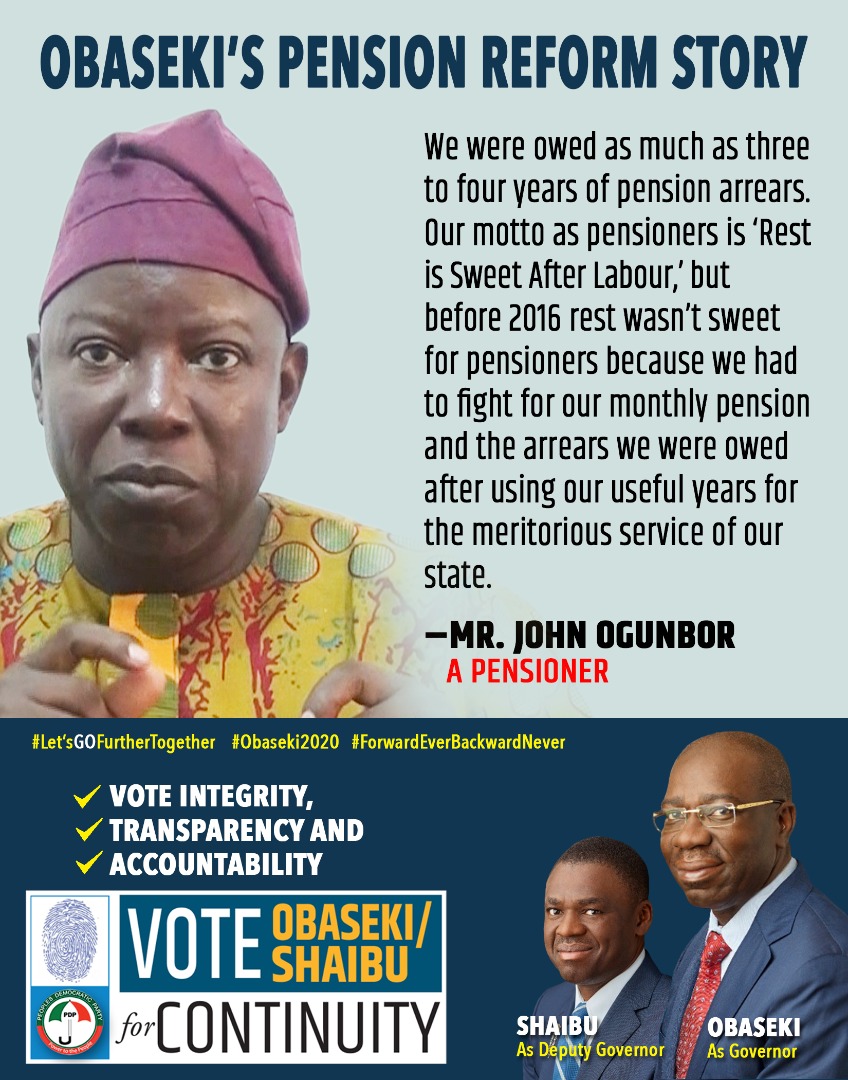 The Edo State Government has expended over N4.3 billion in clearing the backlog of outstanding pension arrears owed about 3,128 pensioners in the state.

It was observed that with the setting aside of N200 million monthly, the Governor Godwin Obaseki-led administration has been able  to defray arrears of pensions dating back to 1996 up to December 2018 in furtherance of its commitment to the welfare of pensioners.

“The government divided the pensioners into batches 37 to 65 and ensured that the backlog was cleared after physical and documentary verifications. Having completed the payment of outstanding pension arrears, the next steps to be considered in the weeks ahead are harmonisation of pensions, payment of Death Benefits and Gratuity.”

The report further revealed that besides clearing the backlog of pension arrears, an efficient management process has been put in place to fast-track the processing and documentation of retiring officers’ entitlements, thus ensuring a seamless migration from salary payroll to pension payroll. This, it noted, has minimised the incidence of accumulation of pension arrears that had been a burden before the inception of this administration.

The report revealed that workers who are eligible  to register under the Contributory Pension Scheme (CPS) have the benefit of a Group Life Insurance cover that makes provision for beneficiaries of a contributor in the event of death in active service.

“The sum of N80,713,446.34 was paid as premium for 9,803 Edo State employees in the CPS. With this payment made, the next of kin of deceased employees receives three times their gross annual salary as benefits. From the commencement of the CPS on 1st January 2017 till date, a total sum of N 81,169,724.24 have been paid to families of 34 deceased employees of the State Public Service who were enrollees of the CPS,” it noted.

The report further stated: “The State Government exercised political will and has been committed to the payment of pension arrears, monthly pension, death benefits under the Defined Benefit Scheme and  government’s 10 percent matching contribution into the Employees’ RSA in compliance with the provisions of  the Edo State Contributory Pension Scheme Law of 2010 as amended.

“Also, a Retirement Benefits Bonds Redemption Fund (RBBRF) account has been opened with the Central Bank of Nigeria (CBN). This account is being funded monthly to ensure that funds are available to defray the accrued pension rights of employees who have registered for the Contributory Pension Scheme. The RBBRF Account is being funded with five percent of the total monthly wage bill of employees in fulfilment of the provision of the Contributory Pension Scheme Law.”